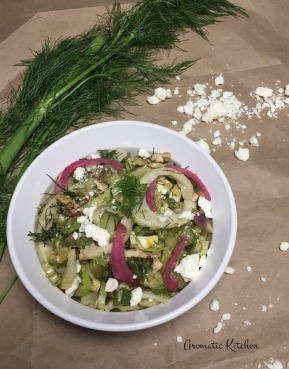 I had never tried fennel before, so when we were at the grocery store one night Aaron put it in the basket.  I wasn’t too sure how to utilize it, so I started adding it to everything I made that week.  (I added it to chicken salad for lunch one day and I liked it in that).

All parts of the fennel are edible.  The bulb, stalks, and leaves.  Fennel has a similar texture and crunch to celery and tastes like black licorice.  It’s quite strange to eat a vegetable that tastes like candy.

As I was making dinner one night, I remembered an interesting celery salad I saw Lidia Bastianich make on her cooking show and thought the fennel might work pretty well in it.  Lidia’s recipe didn’t have pickled onions and she used mozzarella instead of feta.

Adding it to this salad with celery, feta, and walnuts was a nice pairing.  The crispness of the fennel and celery, tang from the vinaigrette and pickled onions, saltiness from the cheese, and bitter and buttery notes of the walnut make the salad full of flavors and textures.  This salad is light and crunchy and is a nice healthy side dish to a meal.  I also like it because it uses celery in an interesting way that’s not in a mirepoix or for Ants on a Log! 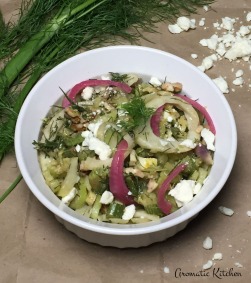 2 stalks fennel with the leaves, sliced

Slice the fennel and celery into roughly 1/8 to ¼ inch slices and put in a mixing bowl.  Add the chopped walnuts, feta, and pickled onions to the bowl.  Toss to combine.  A little before serving the salad, toss with the vinaigrette.  Transfer to a serving bowl and garnish with some of the chopped walnuts and feta.